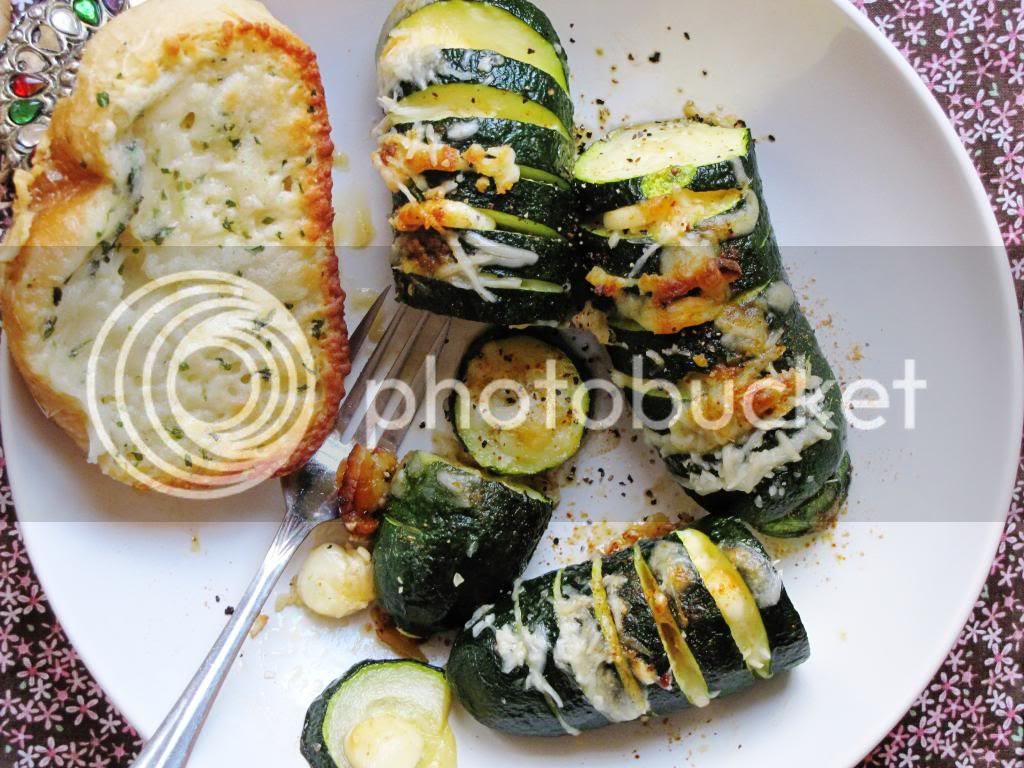 I recently stumbled upon this article on The Huffington Post about the health benefits of zucchini. It was one of those side bar links which invite you to open them and then that leads to another dozen side bar links. I forgot what the original article was that I was reading. But it drew my attention as I had cooked a lot with zucchini this summer and it reminded me about the zucchini hasselback that I had made. Fortunately I had taken a few pictures of it!  I had also tried other recipes with zucchini like zucchini spaghetti and lasagna substituting the real pasta with zucchini. Both the dishes tasted good and are much healthier than eating the real pasta but I missed the real taste and feel of pasta.
But I was the happy with zucchini hasselback. Here I did not really miss the potatoes and with the flavors of garlic and cheese, this dish was delicious. I did not over cook the zucchini and there was still a bite to it with the cheese nicely melted and edges slightly browned.

This recipe is easy, delicious, healthy and practically guilt free

I served it with garlic bread. 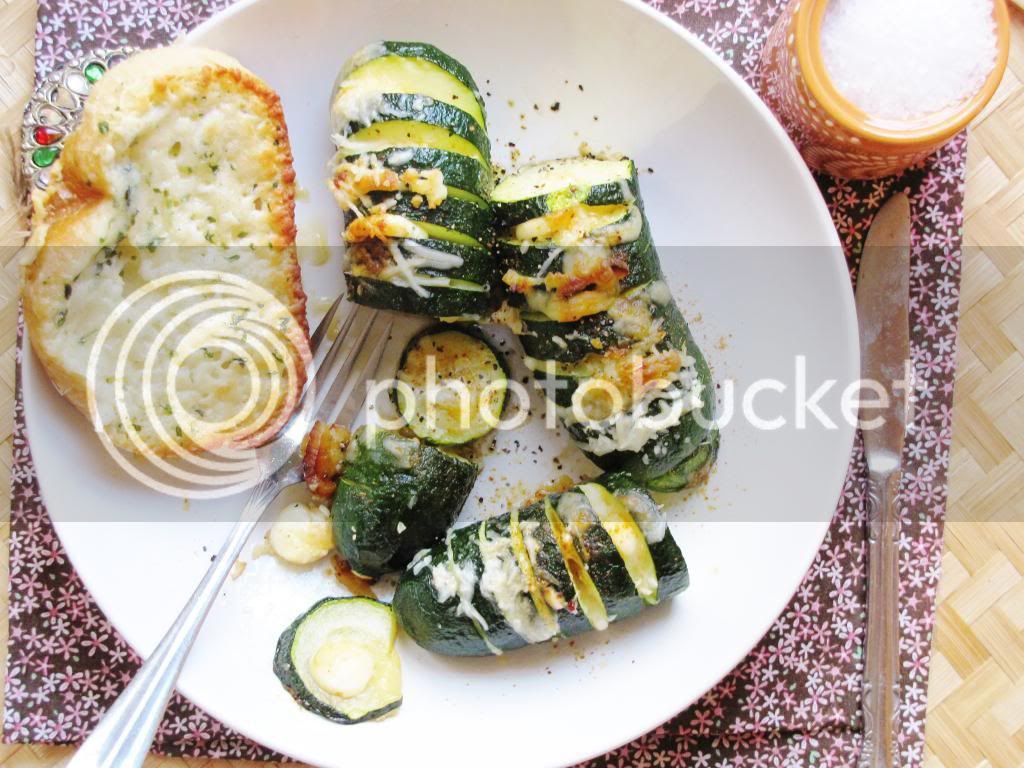 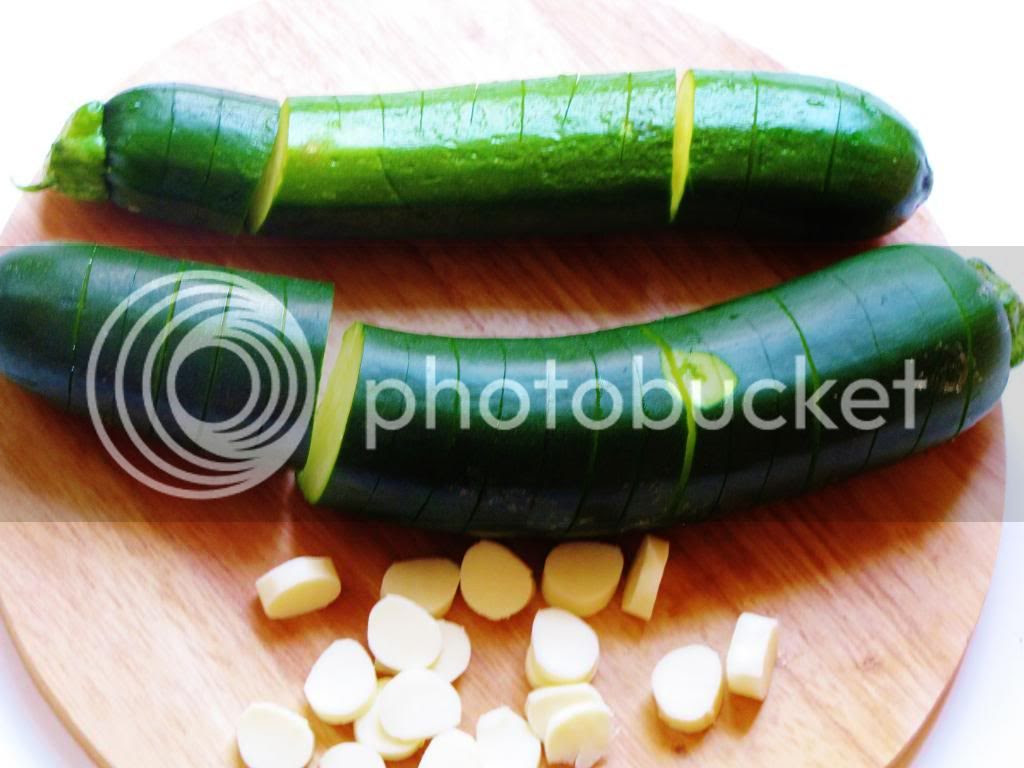 Make garlic oil by adding 2 cloves of mashed or grated garlic in olive oil and heat on low medium heat for about 5 minutes. The garlic should not burn. Once oil is almost ready to boil remove from heat and let it cool completely.


Wash and dry the zucchini
Make slits in the zucchini, keeping the bottom intact.
Brush the zucchini with garlic oil. Sprinkle salt and pepper over it.
Slice mozzarella cheese and insert in the slits of the zucchini.
Sprinkle the top with parmesan cheese and put it in a preheated oven at 350 degrees Fahrenheit and cook till the cheese melts (about 10 minutes). 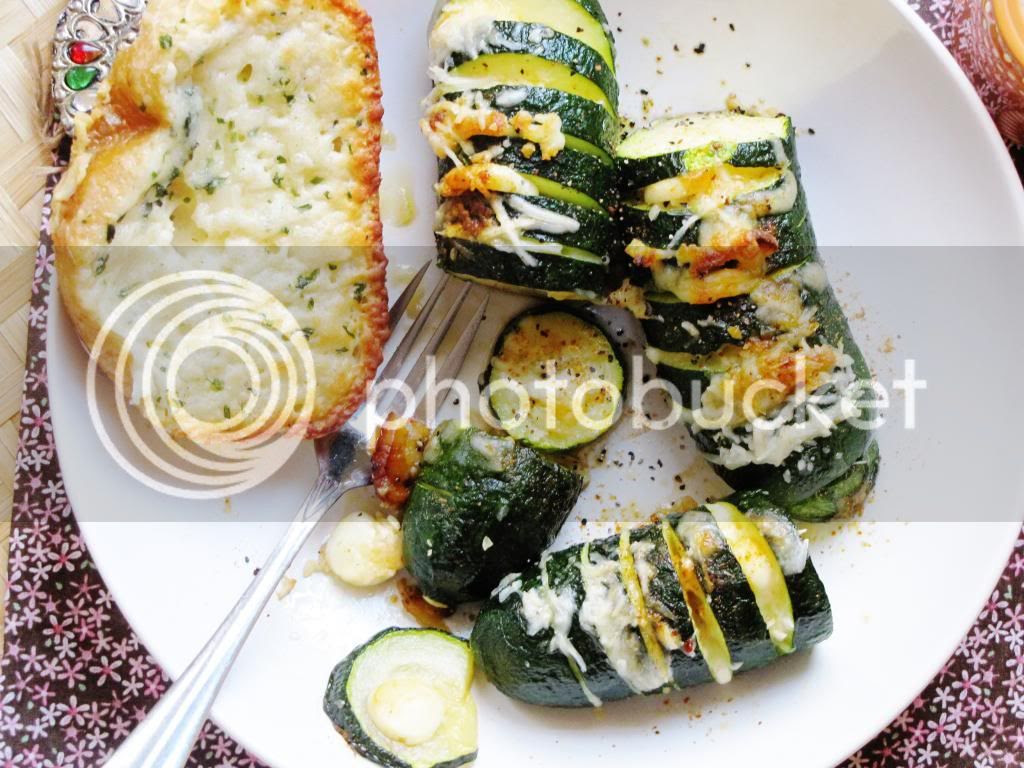 Posted by themustardseed at 10:57 AM 2 comments: 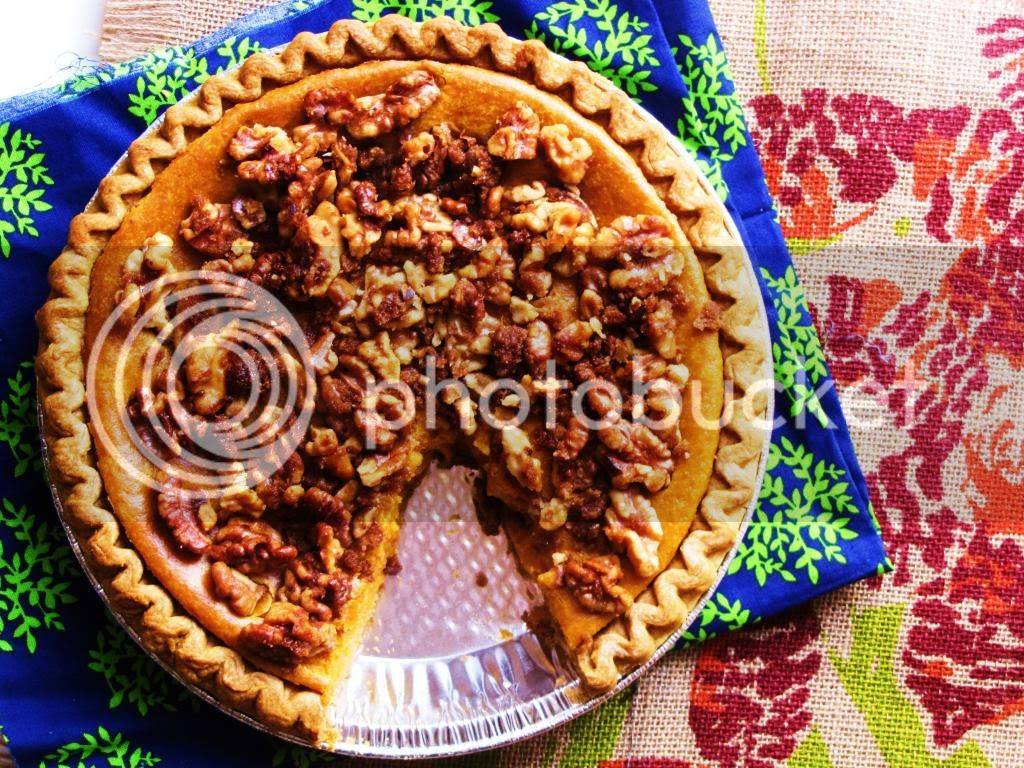 Happy Thanksgiving to all!

Here is a recipe to celebrate Thanksgiving...a Pumpkin Pie! I have never been a big fan on pumpkin pies or at least I have not liked the store bought ones that I have had in the past.
This pie has no eggs in it but the texture and consistency was perfect and taste wise this was the best pumpkin pie that I have had:)

The nut topping added extra flavor and crunch to the pie and I really loved that. But  that is  optional and can be left out if anyone is allergic to nuts or do not like the taste.


I have a lot to be thankful for ..family, friends, good health, my blog, good food and more....

Here is the recipe. 
Preheat oven to 450 degrees Fahrenheit.
Pour the condensed milk and cream cheese and corn starch in a bowl and mix till cheese is well blended.
Add the pumpkin puree and mix till it has a smooth consistency and there are no lumps in it. Add the powdered spices and candied ginger and mix well.
Pour the mix in the pie shell. Put it in the preheated oven and bake for 10 minutes at 450 degrees then reduce the temperature to 350 degrees and bake till the crust is browned and the pie is set (about 45 minutes to an hour. Baking times may vary depending on the size of the oven so check to see when it is set by inserting a toothpick in it.

If you are not adding the toppings then the pie is ready to eat once it cools. It can be served with fresh whipped cream on top. 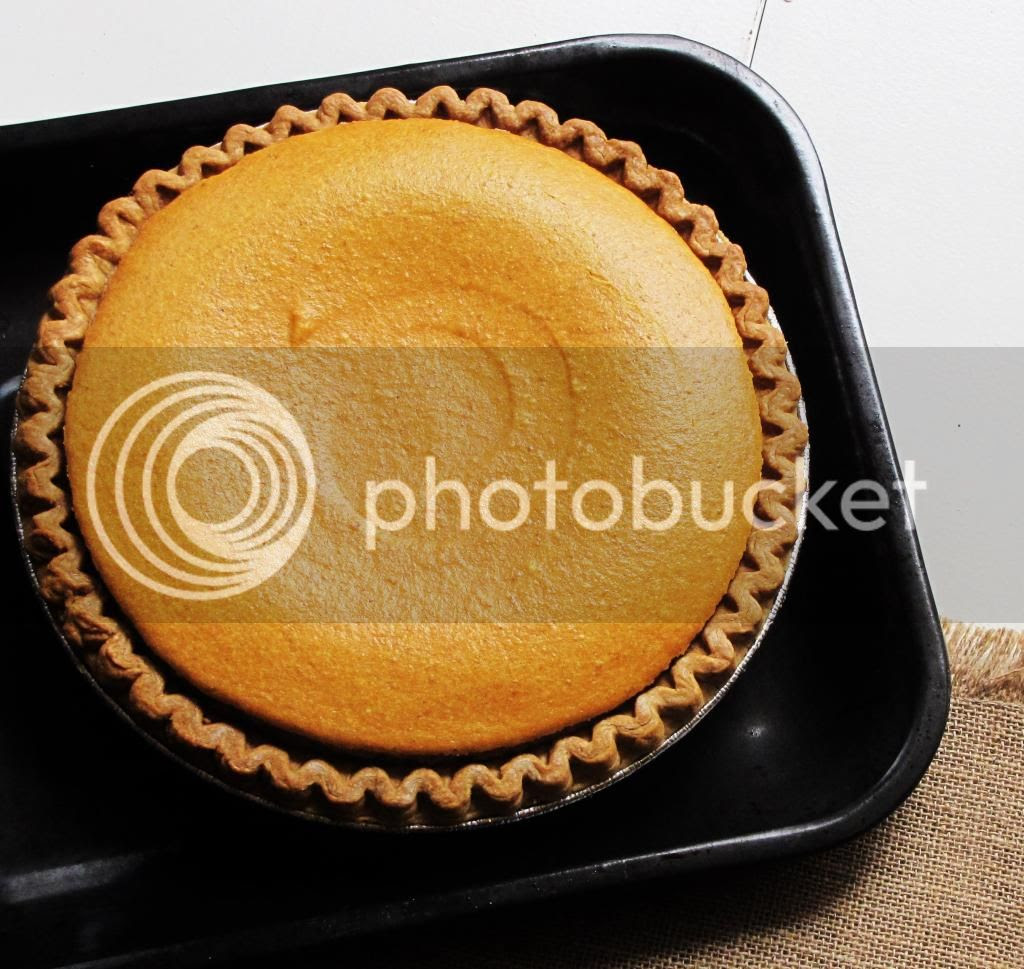 For the topping mix the walnuts or pecans, sugar and butter.
Take out the pie from the oven when the pie is set and is almost ready (the last 10 minutes ) top it with the nuts and put it back in the oven for 10 minutes. 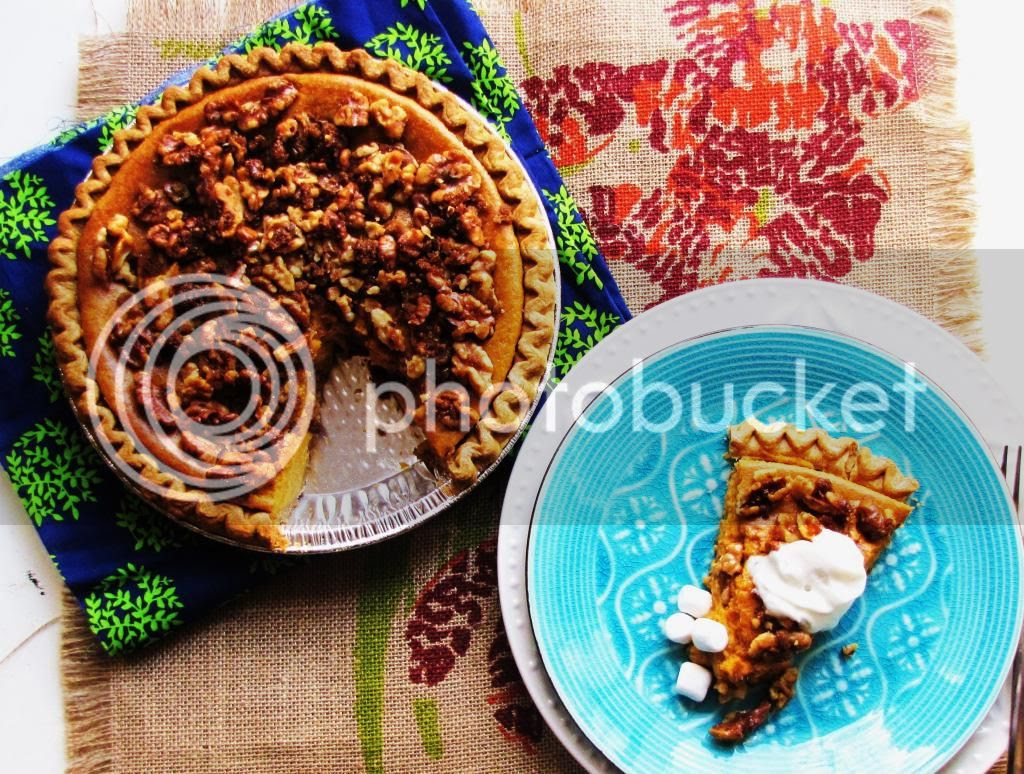 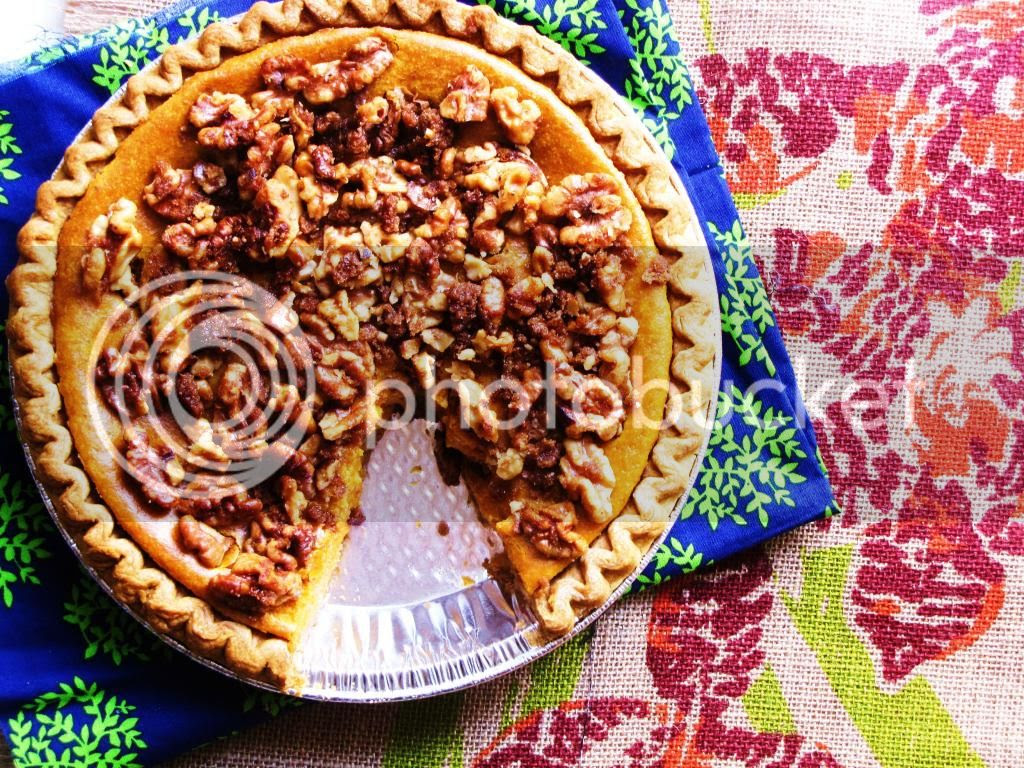 Posted by themustardseed at 12:56 AM 2 comments: 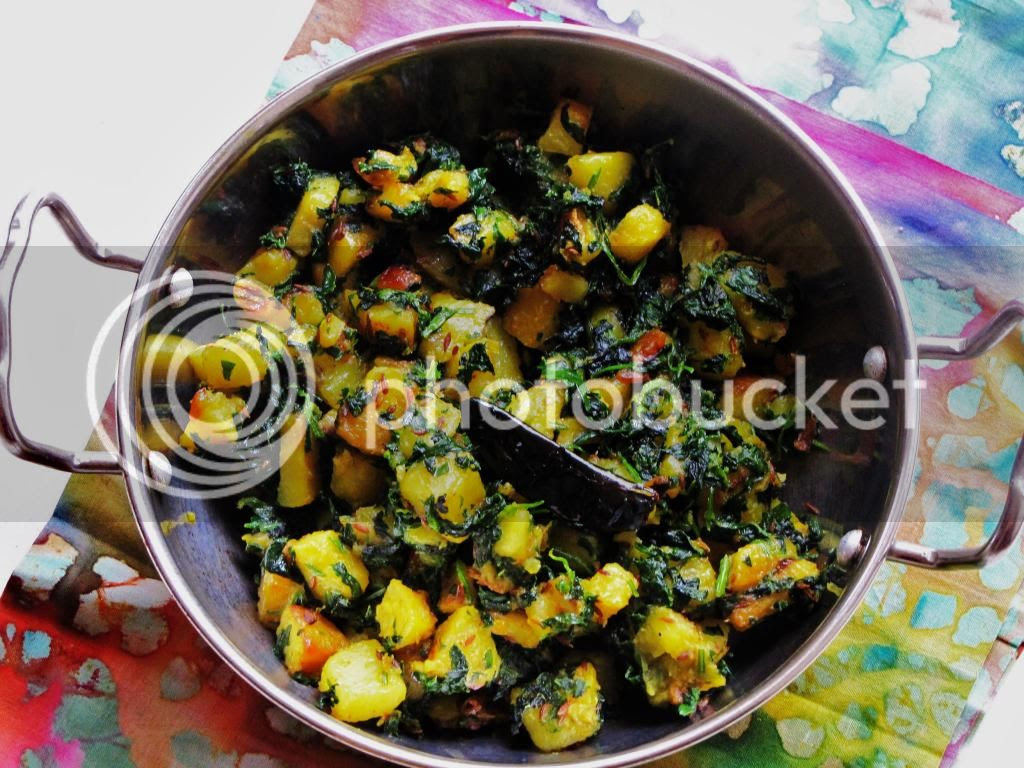 Methi is one of my favorite green leafy vegetable. It has a distinctive bitter taste. I learned to make raw salad with methi leaves and was reluctant to try it the first time but when the leaves are mixed with salt, a little sugar, lemon juice, chilli powder and sesame oil it makes a delicious salad.

Today I have made a very common dish that is prepared in most Indian households...aloo methi.
I am trying to include greens in my daily diet due to the health benefits that all greens have. 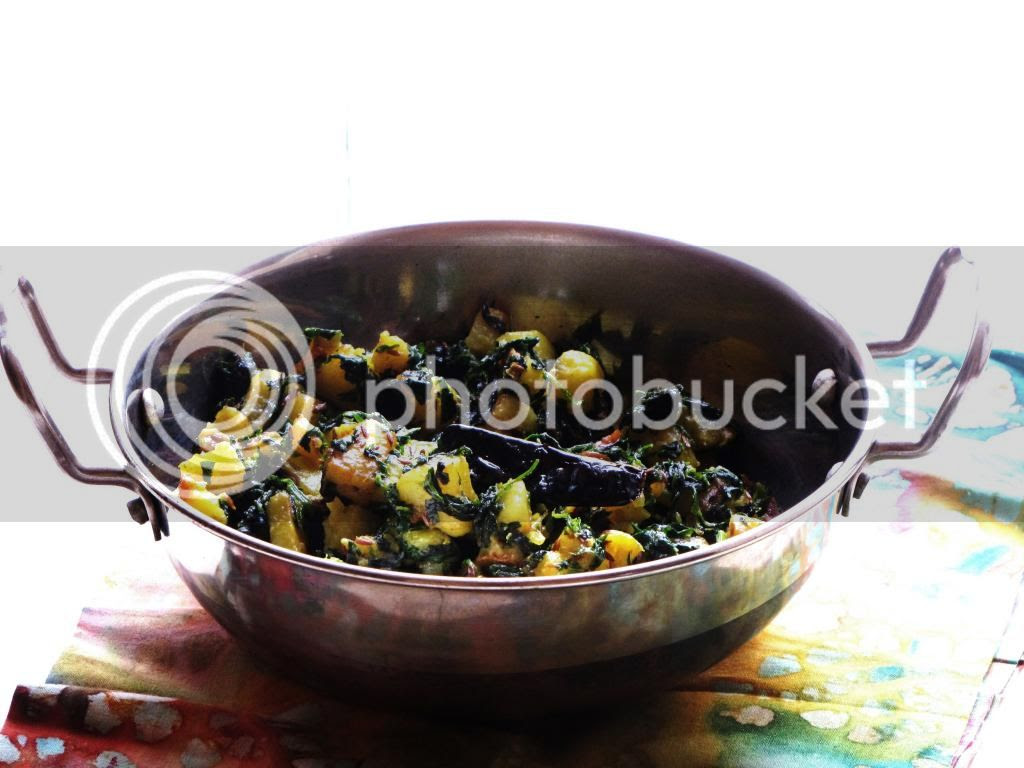 Heat oil in a pan and drop the cumin seeds, asafoetida, and red chillies. Once cumin seeds start to splutter, slide the potatoes, sprinkle salt and let the potatoes cook.
Roughly chop the washed methi leaves.
When potatoes are completely cooked add turmeric powder and methi leaves.
Mix everything well. The methi leaves will wilt and coat the potatoes. Once that happens continue cooking for 2-3 more minutes. Add more salt if needed.

Serve with rotis or rice and a side salad for a delicious and healthy Indian meal. 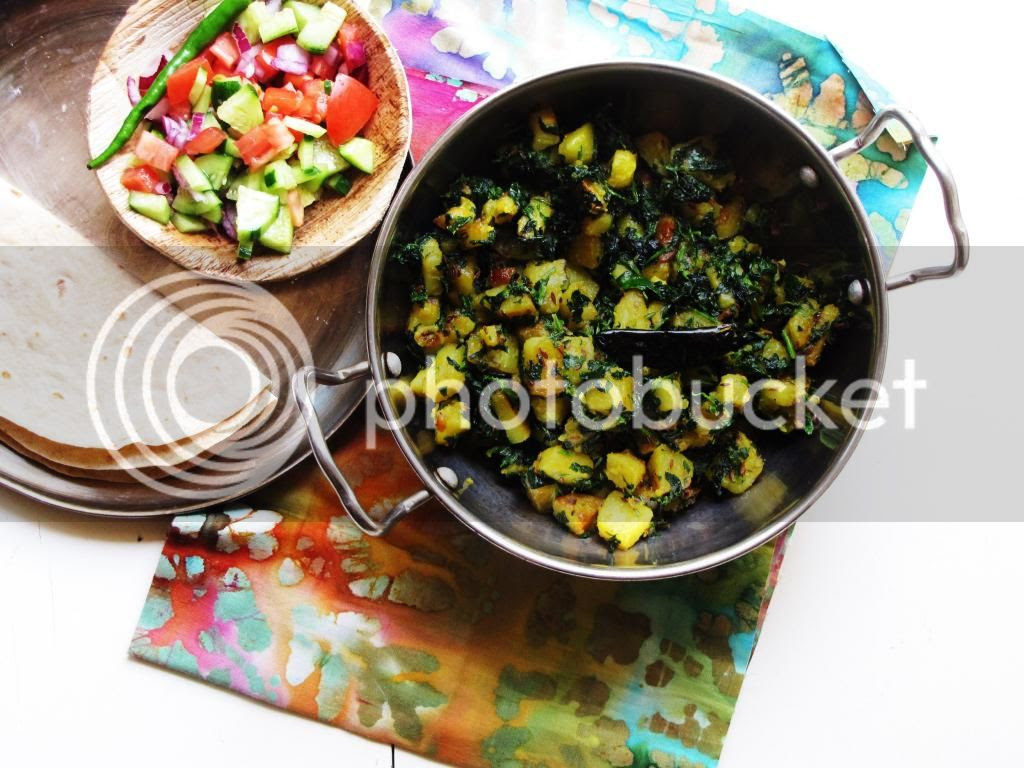 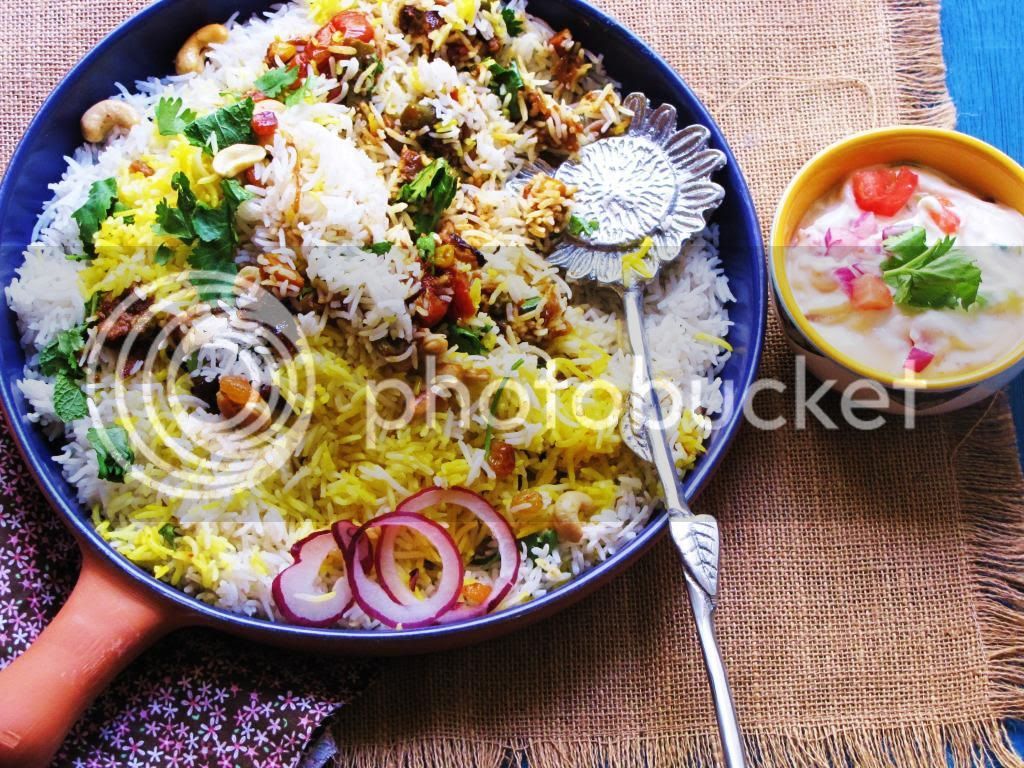 Here is another rice based dish that almost everyone loves.....Biryani.
I have been experimenting with vegetable biryani for some time and this is by far one of the best recipes that I have now.
It takes a while to make and has quite a few steps but, it is definitely well worth the effort.
One of the secrets of making a good biryani is boiling the rice just right. It should NOT become too soft. 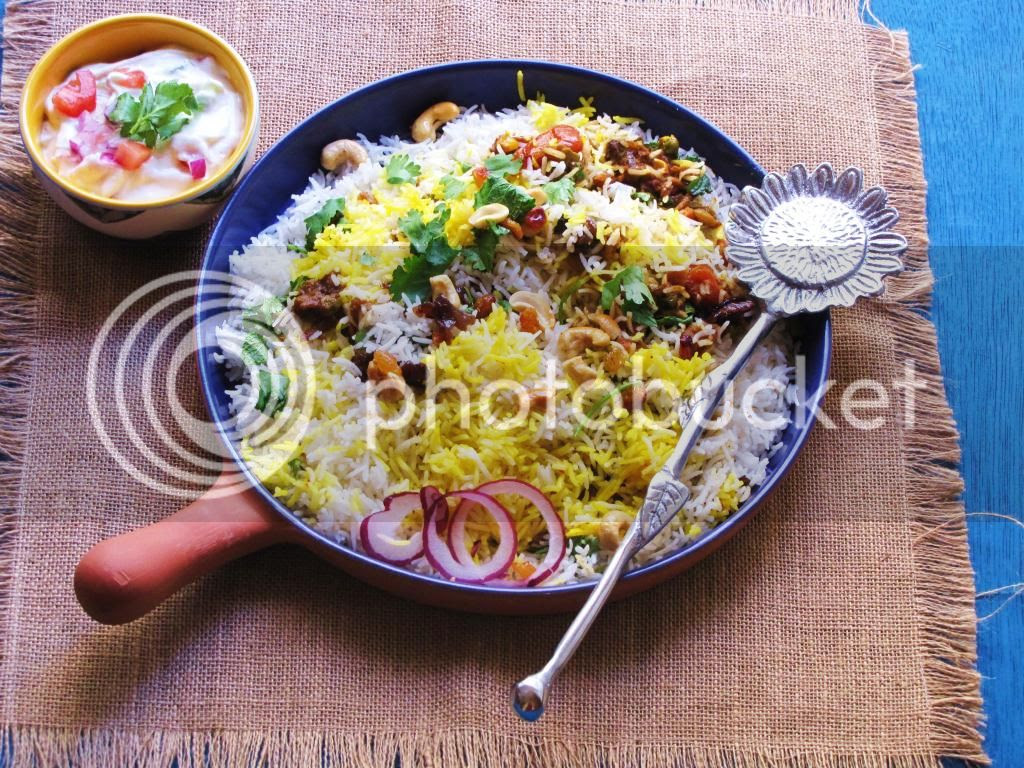 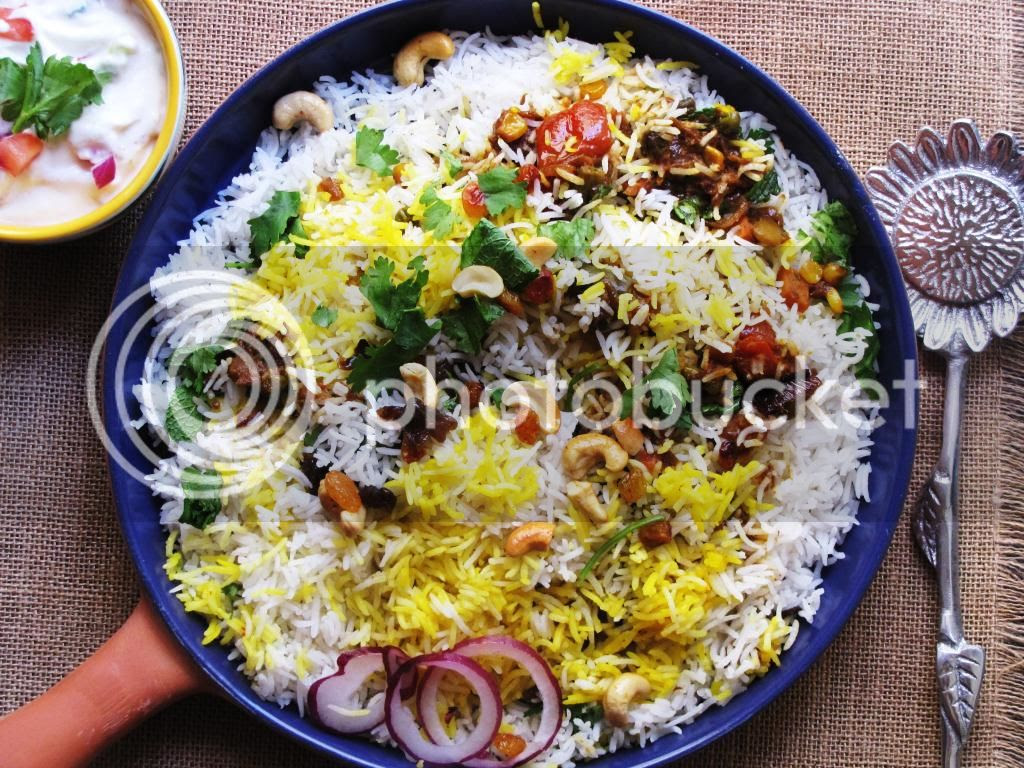 1. Heat oil in a large pan and fry the sliced onions till golden brown and caramelized. (Add some salt while frying the onions). Remove about 1/4 cup onions from the pan using a slotted spoon and reserve it for later use.
2. Add the ginger, garlic, chili paste to the fried onions in the pan. Mix well and cook till the raw smell of the paste goes.
3. Now add all the dry masalas (red chilli powder, turmeric, coriander/cumin powder, biryani masala or garam masala). Mix well. Add the chopped tomatoes and the yogurt. Add the mixed vegetables, adjust the salt. Cover and cook till oil separates. Top it with sliced green chillies and half of the mint and cilantro. Do not mix now.

Preparing the rice.
1. Bring a large pot of water with salt cinnamon, bay leaves, and cardamon to a boil. Add the rice and cook till rice is al dente. About 5-7 minutes. Strain the rice and keep aside. Take a cup of rice and pour the saffron soaked milk in it.
2. Heat ghee and fry the cashews and raisins

Assembling the biryani
Take an oven proof pot and add a layer of rice. Top it with the vegetables and another layer of rice. Gently mix the saffron rice with the top layer of rice.
Top the biryani with cashews, raisins, fried onion and the rest of the cilantro and mint leaves.
Cover tightly with a foil. Place the biryani in a preheated oven at 350 degrees Fahrenheit for half and hour.
Just before serving gently mix. 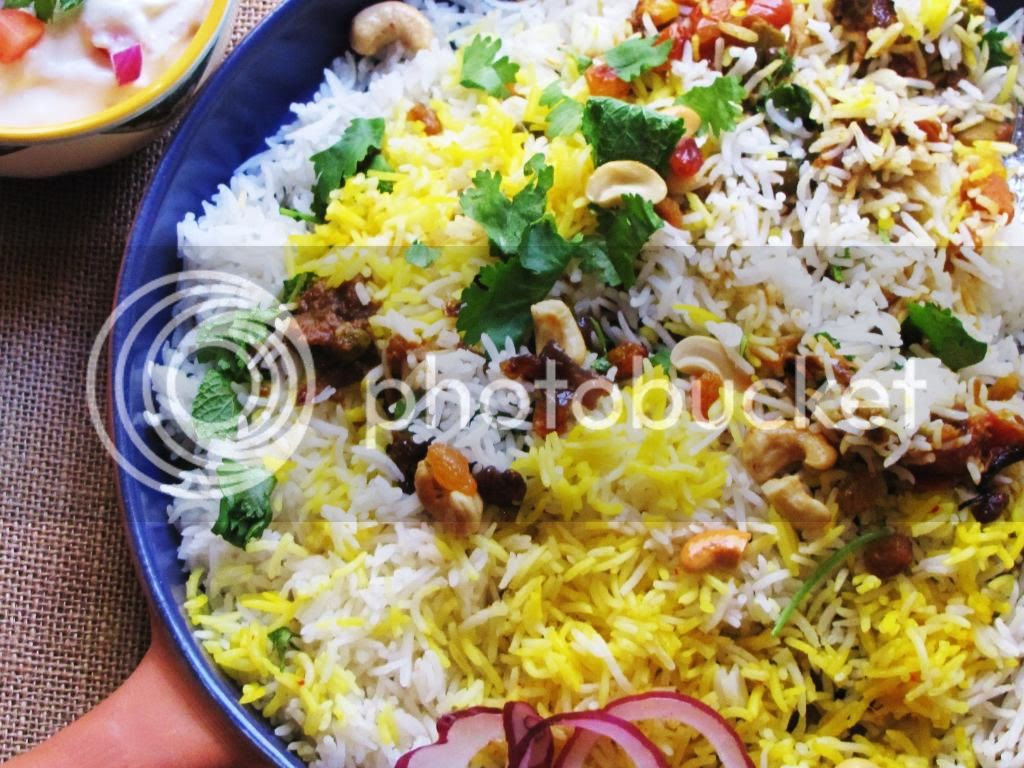 Posted by themustardseed at 9:29 PM 2 comments: